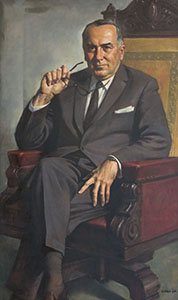 Calvin Lewellyn Rampton (1913–2007) was born in Bountiful, Utah. He attended the University of Utah and served as Davis County Attorney from 1939–1941. Rampton served in Europe during World War II, where he received a Bronze Star and climbed the military ranks. An active Democrat, Rampton ran unsuccessfully for the Utah State Senate in 1954 and United State Senate in 1962. He accepted his party’s nomination for governor and won in 1964.

Rampton asked the Legislature for increased education spending, passage of three civil rights bills, and the right to use federal funds for urban renewal. The 1967 Legislature acted in accordance with many of his requests, passing a series of landmark legislation for the state.

Throughout his three terms in office, “Cal” Rampton remained a popular governor. The Calvin L. Rampton Complex—which houses the Utah Department of Transportation and the Utah Department of Public Safety—and the Cal Rampton Boardroom at the Capitol are named after him. After Rampton’s death in 2007, the Salt Palace Convention Center was renamed the Calvin L. Rampton Salt Palace Convention Center in his honor.

Alvin L. Gittins (1922–1981), one of Utah’s finest painters, came from England to study art at Brigham Young University. He later taught for many years at the University of Utah. Gittins was Utah’s most dominant portrait painter and was noted for his ability to capture his subject’s personality as well as likeness, and for his masterly traditional styles. He also painted Governor Matheson’s portrait.