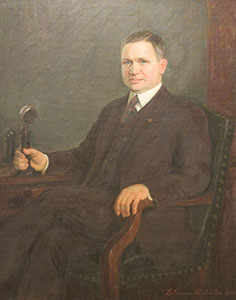 Charles Rendell Mabey (1877–1959) was born in Bountiful, Utah. He attended the University of Utah and worked for ten years as a teacher and administrator. Mabey served in the Utah National Guard during the Spanish-American War and received a citation for gallantry.

Mabey’s public service career began when he served as a justice of the peace, and later as city councilman and mayor of Bountiful. He also served two terms in the state Legislature. When World War I began, Mabey served again with the Utah National Guard.

In the gubernatorial race of 1920, Mabey ran an active and persistent campaign, taking a strong and positive stance on developing state resources while minimizing government administration. Once elected, he cut state administration costs by nearly $170,000 in one fiscal year and condensed redundant state boards into fewer departments. Mabey valued public education highly, and under his encouragement, the Legislature increased education funding to the entire state. Additionally, almost 500 miles of new roads were built in Utah during Mabey’s term, an impressive legacy that shaped the future development of the state.

Lee Greene Richards (1878–1950) was a well-known Utah artist who studied with J.T. Harwood and trained in France. In 1904, he received an honorable mention at the Paris Salon, making him the first Utah painter to receive this honor. Richards’ artwork can be seen throughout the Capitol: murals in the rotunda and Senate chamber, as well as portraits of Utah governors Spry and Maw.