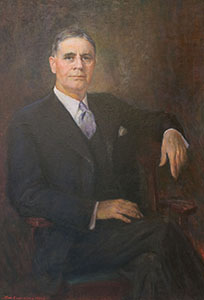 George Henry Dern (1872–1936) was born in Nebraska and came to Utah at age 22. He co-invented the Holt-Dern ore roasting process and worked for the Mercur Gold Mining and Milling Company and other local mining companies. While not a member of the predominant political or religious groups in the state, Dern was widely successful in politics. He was elected to the state Senate in 1914 on the Democratic ticket. When he won the gubernatorial race in 1924, he was the only Democrat elected to a statewide office that year.

Governor Dern was a progressive politician, and his accomplishments included establishing teaching certificate requirements and revising tax laws to favor middle- and low-income groups. He also secured federal funds for road construction and other programs. Dern declined to run for a third term in 1932 and promoted Henry Blood as his successor.

Dern became the first Utahn to hold a position in a presidential cabinet when President Franklin D. Roosevelt named him Secretary of War. Dern was instrumental in enlarging and motorizing the nation’s military at a time when domestic concerns took priority over foreign affairs. During his time in the presidential cabinet, he also supported the creation of the Civilian Conservation Corps, a public work relief program that provided manual labor jobs for young unemployed men during the Great Depression.

John Willard “Will” Clawson (1858–1936) was a nationally known portrait painter. He studied locally with George Ottinger and in Europe with Impressionist masters Edouard Manet and Claude Monet. Clawson painted the portraits of many society figures of his day, including a portrait of his grandfather, Brigham Young, and three other Utah governors: Wells, Cutler, and Bamberger.