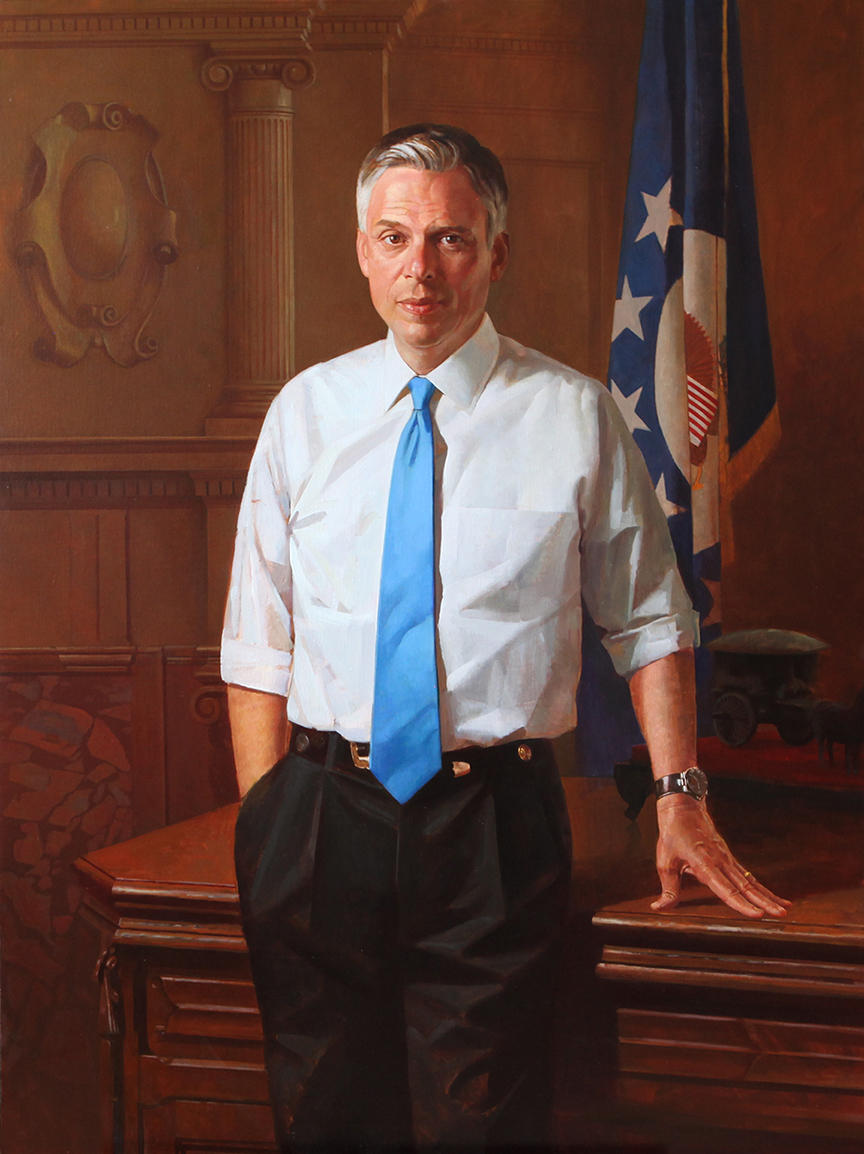 Jon Meade Huntsman, Jr. (1960–) was born in Palo Alto City, California. He grew up in Salt Lake City and attended Highland High School, the University of Utah, and the University of Pennsylvania, ultimately earning a bachelor’s degree in international politics. Early in life, he worked as a White House staff assistant in the Ronald Reagan administration. Other political involvement included serving as the U.S. ambassador to Singapore under President George H.W. Bush and as the U.S. trade ambassador under President George W. Bush.

In 2005, Huntsman was sworn in as Utah’s 16th governor. He served for nearly five years and was one of Utah’s most popular governors, reaching an approval rating of nearly 90 percent at one point in his tenure. Under his leadership, Utah was rated the best-managed state in the country by the Pew Center on the States’ Grading the States 2008 Report. As governor, he cut taxes by more than $400 million and expanded Utah’s economy. Huntsman also pursued increased teacher compensation, as well as better student access to literacy, math, and science programs. Huntsman kept a steady job growth rate in Utah during the 2008 recession, a time that marked one of the largest employment declines in U.S. history.

Huntsman resigned as governor of Utah in 2009 to accept a position as U.S. Ambassador to China. In 2011, Huntsman announced that he would campaign for the Republican presidential nomination, but he suspended his bid in January 2012. Also in January, Huntsman replaced his father as chairman of the Huntsman Cancer Institute. Later that year, he was appointed to the boards of directors of the Ford Motor Co. and Caterpillar, Inc.

Galina Perova (1958–) was born in the former Soviet Union. She attended art school in Russia as a young child and later worked with E. E. Moiseinko, an internationally recognized artist and educator. Perova graduated at the top of her class when she received her Master of Fine Arts and doctorate degrees from the Repin St. Petersburg State Academy Institute of Painting, Sculpture, and Architecture. Perova continues to work, maintaining studios in Salt Lake City, Utah, and National Harbor, Maryland. The flag shown in Huntsman’s portrait is the flag of the U.S. ambassador.