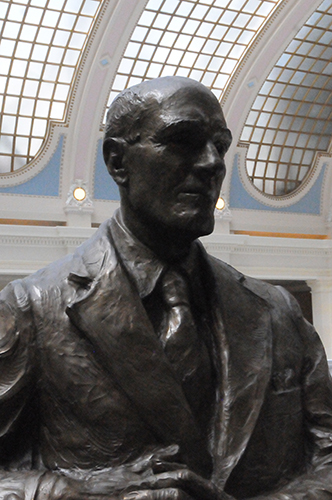 Maurice Warshaw was born to a Jewish family in Ukraine in 1898. Warshaw relocated with his family to the United States because of heavy persecution of Jewish people in Ukraine. At age 14, he moved to a Jewish community located near Gunnison, Utah, and eventually made his way to Salt Lake City. He is remembered for his work as an entrepreneur, philanthropist, and humanitarian.

Warshaw started a fruit stand called Grand Central Market, which grew in popularity and led to him opening a grocery store–an “all in one” store–the first of its kind. His store spanned decades and was eventually bought by grocery chains Fred Meyer and then Smith’s. He also worked with international humanitarian projects focusing on the handicapped and underprivileged. This may have been influenced by his only son who was injured while playing high school football and became paralyzed and wheelchair-reliant for the remainder of his life.